This 1793 Chain Cent is PCGS graded “MS-65,” which indicates that it is a gem quality coin, in the view of PCGS graders. Further, it has a sticker of approval from the CAC. My inquiries suggest that most expert graders are accepting of the 65 grade. It was also PCGS graded MS-65 when it was last auctioned, in 2004.

My tentative impression is that it was encapsulated by the PCGS at some point after May 1996 though before 1999. I wish I had kept my old PCGS population reports.

Specialists in die varieties of early copper coins do not grade it as MS-65, because, in their view, a MS-65 grade coin must exhibit a substantial amount of original mint red color. This coin is designated as being ‘brown’ by experts at the PCGS even though it is mostly a red-tan color, because its ‘red’ is not original. Unlike a club of specialists in the varieties of early copper coins (the EAC), the PCGS and the NGC separate a designation of color (Brown , Red & Brown, or [mostly] full Red) from the factors that are employed to compute each copper coin’s grade.

There are very few gem quality Chain Cents of any die variety. In regards to the Eliasberg-Atwater-Jung 1793 Chain Cent, my guess is that it would have brought the same result if, imaginatively, it was a different variety of Chain Cent. A fortunate aspect of this (with periods) variety, however, is that the head of Miss Liberty tends to be more attractive than the respective heads on the Chain Cents of the other two groups, which are often known as ‘AMERI.’ (S-1 variety) and ‘AMERICA’ spelled out with no periods (S-2 and S-3 die pairings).

On the Eliasberg-Atwater-Jung Chain, Miss Liberty’s hair and face are exceptionally sharp and have toned a neat shade of tinted brown. The color of Miss Liberty’s head contrasts well with the red-tan fields, which are characterized by thin brown streaks. Its color, however, is not the most impressive aspect of the Eliasberg-Atwater-Jung Chain Cent.

Indeed, I was not impressed by the color. The wonderful characteristics of this coin are its sharply detailed strike, its lack of contact marks, and the fact that it was struck on a planchet (prepared blank) that had minimal imperfections. Many large cent planchets (prepared blank circular pieces of metal) had problems, which affect the eye appeal and/or technical integrity of the coins that were struck on these blanks. The planchet on which this coin was struck had only minor imperfections that are not bothersome, in my view.

“Its got a planchet flaw around 7:00,” Greg Hannigan remarks. “Some collectors are bothered by such a thing. I like the surfaces and it is struck beautifully, ” Hannigan exclaims. He is a leading dealer of large cents. Walt Husak, a famous collector of large cents, declared that “its beautiful” overall.

The Eliasberg-Atwater-Jung Chain Cent is “amazing,” Matt Kleinsteuber declares. “It really glows and has no friction. I love that coin,” Matt reveals. Kleinsteuber is the lead trader and grader for NFC coins.

I was startled by the $1.38 million result. Similarly, Hannigan “was very surprised that it went for that much. [He] was figuring that it would sell for around $925,000.” Chris McCawley, another leading dealer of large cents, had predicted that it would sell for “$850,000 to $975,000. All the really great coins are bringing great prices,” Chris finds, though “off quality coins” are a different matter. 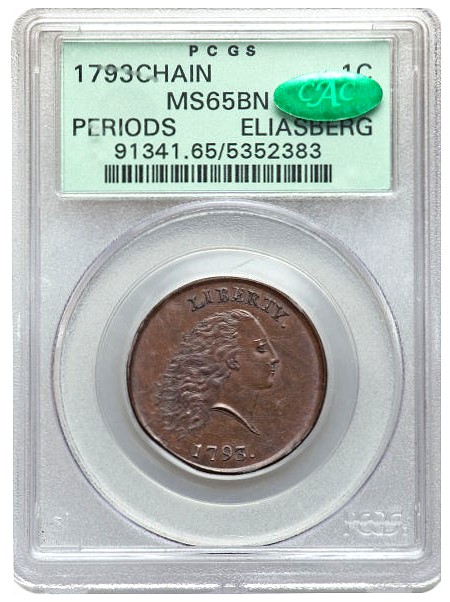 Before the auction, the PCGS price guide valued this coin at “$750,000” and the Numismedia.com guide valued “MS-65” grade Chain Cents, as type coins, at “$375,000” each. It is unlikely, though plausible, that leading bidders for this coin focused upon its variety. Most likely, they would have been willing to put forth the same respective bids for a Chain Cent of any variety that is of equal to or of higher quality than this one, though the ‘AMERICA’ varieties (S-2 and S-3) tend to have much less well defined heads of Miss Liberty.

I asked Greg Hannigan and Chris McCawley to estimate the number of Chain Cents of all varieties that are, or would be if submitted, PCGS graded 65 or higher, of all designations.Hannigan said “nine” and McCawley said “seven.” I wonder if there are more than nine. Though I have not yet had a chance to unearth all of my notes. I am almost certain that I have seen six that are PCGS graded 65 or higher, or would be if submitted. I am including this Eliasberg-Atwater-Jung coin among the six.

It is relevant that PCGS grading and EAC grading are far from identical. The difference is not in standards; the respective criteria are very different. Rosters of Chain Cents that are compiled with EAC criteria in mind usually do not reflect the grades that the PCGS would, in the present, assign to the same coins.

While this is a cool coin with an especially noteworthy lack of contact marks, and a truly super-great pedigree, $1.38 million is a high price for it. I was expecting a price in the range of $900,000 to $1,050,000. This coin’s pedigree and the fact that another certified 65 or higher grade Chain Cent has not been recently auctioned contributed to the demand for this coin.

A Chain Cent of the rarer first variety, with the ‘AMERI.’ abbreviation, sold early in 2011 for $2 million in a private transaction. (Please click here to read about that deal in Nevada. As usual, clickable links are in blue.)

That “AMERI.” cent is designated as a special ‘Specimen’ striking by the PCGS. Though it has been a long time since I have seen this ‘SP-65 AMERI.’ cent, I tentatively assert that it is a much better coin, in a few ways, than is this Eliasberg-Atwater-Jung Chain Cent.

(8) In September 2009, the firm of Ira & Larry Goldberg auctioned the finest known 1795 Reeded Edge (S-79) Cent in Los Angeles for $1,265,000. Except for this issue, large cents have plain edges. Personally, I regard it as an experimental piece, rather than as a regular issue large cent. Greg Hannigan was the successful bidder, on behalf of a collector who has since completed a set of Sheldon numbered die varieties of large cents.