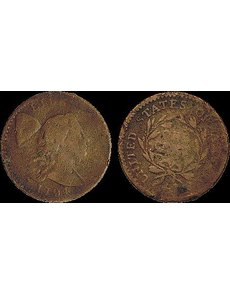 The fifth known example, shown, of the NC-11 variety of 1794 Liberty Cap cent, in About Good 3 is tied for third place in the Early American Coppers’ Condition Census. The piece was recently attributed.

The fifth-known example of the Noncollectible 11 variety of 1794 Liberty Cap cent was reported Jan. 7 during the Early American Coppers meeting held in conjunction with the Florida United Numismatists convention in Orlando. The new example was reported at the EAC meeting by Greg Hannigan from Hannigan’s Rare Coins LLC, in Royal Palm Beach, Fla. All known examples are heavily circulated, with the finest known, the initial discovery piece, being a Very Good 8, and the lowest a Fair 2. Noncollectible attributions represent those varieties whose rarity is such to afford fewer than a half dozen examples being in collectors’ hands. The NC-11 1794 Liberty Cap cent is not listed in William H. Sheldon’s 1958 Penny Whimsy, since the variety was not attributed until four decades after the publicaton of Sheldon’s book. The variety is identified in Walter Breen’s Encyclopedia of United States Large Cents as “NC 11.”

Tied for third
Bob Grellman, large cent specialist, researcher and cataloger, and EAC Region 4 chairman, said Hannigan’s example, in About Good 3, ties for third in ranking on EAC’s Condition Census for the variety. Hannigan said he acquired the fifth known example of the NC-11 1794 Liberty Cap cent during the Whitman Coin and Collectibles Expo in Baltimore in November, and sold it for an undisclosed sum during the FUN show to Tennessee collector Mike Swift, who was seated in the same row of chairs as Hannigan during the EAC meeting. Hannigan said the coin had been previously acquired by eBay seller Jeremy Mayor, and submitted to large cent attribution expert James Young Jr., who now, along with his brother Chris, is responsible for finding or attributing three of the five known NC-11 cents. The NC-11 variety was initially discovered in 1995 by James H. Young (no relation to James Young Jr. or Chris Young), who attributed the previously unknown variety more than four decades after it was originally acquired by its owner.

Ossining, N.Y., grocer Harry Leifer received that discovery coin over the counter at his grocery store circa 1950 and kept the coin until his death in 1991. In 1995, Leifer’s son, Bret, who inherited the coin, had it attributed as the new NC-11 variety by James H. Young. The Very Good 7 coin was subsequently sold to consummate large cent collector Robinson S. Brown Jr. in a private sale.
The coin was sold at public auction in 1996 by Superior Stamp & Coin Co. for $23,100 to collector Daniel W. Holmes Jr.
Ira and Larry Goldberg, Auctioneers, sold the Holmes’ coin at public auction in September 2009 for $26,450.

Diagnostics
The NC-11 1794 Liberty Cap cent pairs the Obverse 11 die with Reverse K. (Researchers assign the obverse dies a numerical designation and reverse dies an alphabetical designation.)
Obverse 11 is noted by, according to Breen: “Very wide date, spaced 17 94 with the 9 and 4 tipped to the left. Hair ends in seven thin sharp locks. Most are longer than usual, the bottom is shorter than usual, and the top two are unusually far apart. Pole does not enter the cap. Shallow shoulder loop. Dentils at the left and top are joined for much of their length. Narrow extra dentil between two wider ones opposite the base of the cap. liberty is unusually close to the border with li and er closer together than other letters. Heavy period between the bases of li and another at the base of i.” According to Breen Reverse K diagnostics are: “The ribbon knot is large. Broken or incomplete leaves are below ta, above o(n) and (n)e, and below ri. The inner leaf nearest (n)t is narrow, the left leaf below that t is weak at left, and later looks as though something has taken a bite out of its left edge. Six berries on each branch with that right of (n)e minute, its stem faint and incomplete. Fraction bar is nearer the numerator, which is above the right curves of the first 0.